Brazilian multi instrumentalist Renato Martins, from São Paulo, started to play percussion and piano when he was four years old. He studied drums and jazz piano and finished his musical studies with courses in classical piano, composition and conducting.

Renato Martins has created new techniques for traditional instruments; for example, the UDU and the CAJON. He’s also known to have applied kitchen utensils as percussion instruments and has been described as an innovator of Brazilian percussion by Brazil’s specialized media. He is considered one of the most respected percussionists in the world.

Renato Martins lives in Brussels since 2004 and has worked extensively playing with big names of the jazz scene in the country. He created there the Boris Gaquere & Renato Martins guitar and percussion duo and they have played in Belgium, Switzerland, France, Poland, Czech Republic, United States, Brazil, Argentine and Taiwan.

Brazilian multi instrumentalist from São Paulo, Renato Martins started to play percussion and piano when he was four years old. He studied drums and jazz piano and finished his musical studies with courses in classical piano, composition and conducting.

Renato Martins has created new techniques to traditional instruments; for example, the Udu and the Cajon. He’s also known to have applied kitchen utensils as percussion instruments. Renato is one of the most respected percussionists in the world and described as an innovator of Brazilian percussion by Brazil’s specialized Media.

Between 1994 and 1996 he lived in England and played with the tabla player Sarvar Sabri, the sax player Andy Hamilton and other big names of jazz and ethnic music in the country. He participated in festivals like Womad and The Birmingham Jazz Festival. He also played at The Queen Elizabeth Hall in London with the percussionist Nana Tsiboe from Ghana.

In 2003 Renato Martins launched his first solo CD, ‘Indaiá’.  The album was celebrated by the media experts and it was released at the most prestigious venue of instrumental music in Brazil, the Instrumental Sesc Brasil, broadcasted by the cable channel Rede Sesc-Senac de Televisao with a big audience.

Renato Martins lives in Belgium since 2004 and has worked with big names of the jazz scene in the country. He has played with Steve Houben, Greg Houben, Charles Loos, Hendrk Braeckman, Sam Gerstmans, Victor da Costa, Henri Greindl, Daniel Stokart, Daniel Miranda, Maxime Blésin, and Osman Martins. He has played at some important venues of Brussels like Flagey, The Music Village, Théâtre Marni, Jazz Station and Téâtre Molière.

As a sole percussionist, Renato has performed at the Catalunyan International Percussion festival in Barcelona, Spain, the Batuka! Brasil International Drum Festival, Brazil, among others and toured the US and Canada as the percussionist for Cirque Du Soleil’s show called OVO in 2009 and 2010.

Renato Martins is a musical educator, clinician and taught percussion at the 30th and 31st Winter Festivals of Campos do Jordao. He also taught percussion at Conservatório de Tatuí’s Paunel Instrumental Festival and at one of the most important festivals in Brazil, Oficina de Música de Curitiba.

Renato released his album “Indaiá” in Belgium in 2012 performing with his quintet at the cultural center De Muze van Meise. In the same year, he was one of the finalists of the Boss Loop Station World Championship.

In 2014, the Renato Martins Trio performs at one of the most important percussion festivals in the world, the Taiwan International Percussion Convention. The trio performed at the National Concert Hall in Taipei, also in different cities in the country.

Renato Martins is a Latin Percussion and Audix Microphones artist.

“…one of the most respected percussion artists in the world…”

“…one of the few with the amazing ability to tell stories, create tension, delight, thrill using only percussion instruments…”

“…an innovator of the Brazilian percussion …”

“… a movie without cuts, with panoramic images …pictures of landscapes through sounds, in the most natural possible way …natural, contemporary, universal, it contemplates vitality, diversity …”

“Indaiá” is one of the best instrumental music records launched recently in Brazil. An unique brazilian jazz …”

“It had been six years waiting for this beautiful recording to arrive for the public and to sound so recent as if it had been released today. The multiinstrumentalist Renato Martins switches from the piano to the percussion, showing his musical abilities in nine own compositions. He plays with his close and talented friends, like Roberto Sion (on flute and sax on three tracks) and the excellent Célio Barros on the acoustic bass. Pure Brazilian languages are creatively rearranged as on the percussive Sambacatu. “

“Brazilian Rhythms mixed with Latin, African and Indian influences, and still jazz, flamenco and classical – everything lead by a percussive base. This is the recipe presented by multiinstrumentalist Renato Martins on his first album “Indaiá”. Considered a renovator of the Brazilian percussion, Renato already played with a great number of Brazilian jazz and MPB artists. Inventive and full of great technique. “

“Percussionist that already played with Ulisses Rocha, André Geraissati, Celso Pixinga, Sá & Guarabira and Moacyr Luz, Renato Martins presents his acoustic sounds, also on the piano, on his first solo album. It’s on Boca Suja and Sambacatu that he shows his master percussion.”

“The musician launches a record with great guests like Oswaldinho do Acordeon and Roberto Angerosa. Brazilian jazz and excellent instrumental music…”

“Considered one of the renovators of the Brazilian percussion, Renato Martins uses everyday objects as percussion instruments, with such creativity. … The record is marked by the modernity and the quality of the tracks, as Pianíssima, Boca Suja and Sambacatu.”

“Partner of masters of instrumental music, as Mozart Mello, Celso Pixinga and Taj Mahal, the multiinstrumentalist Renato Martins presents his talent as a composer on “Indaiá”, his first solo album launched by the label LUA MUSIC. There are nine tracks, all composed by him, being two of them partnerships. … It has tunes like Sambacatu, that announces the mixture that he intends to make … full of percussive elements, solo piano (Pianíssima) or piano and acoustic bass duets (Segredos) …” 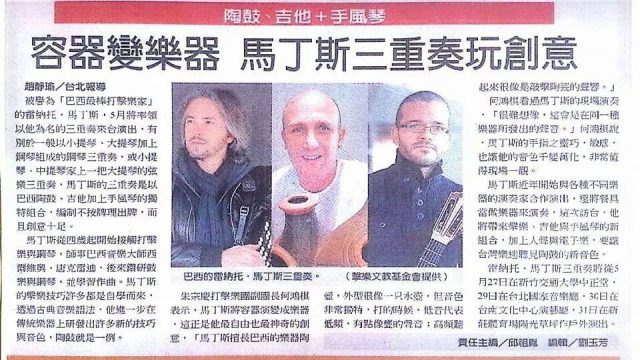 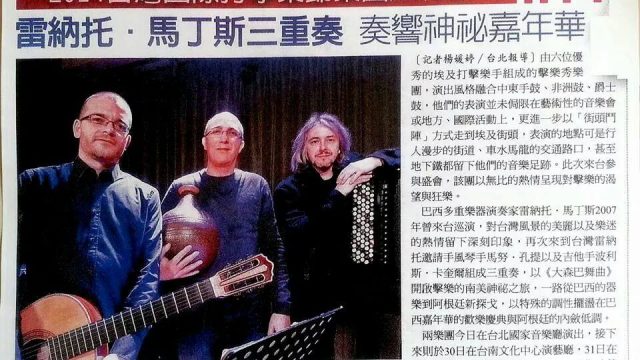 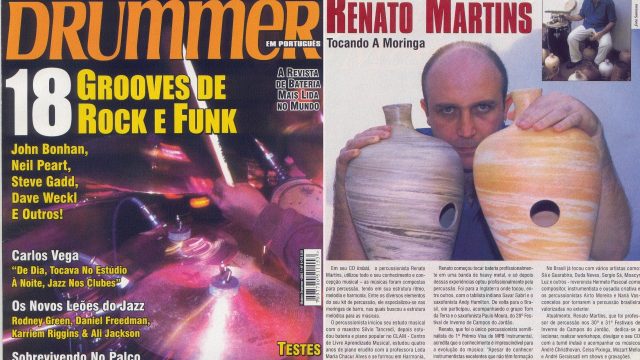 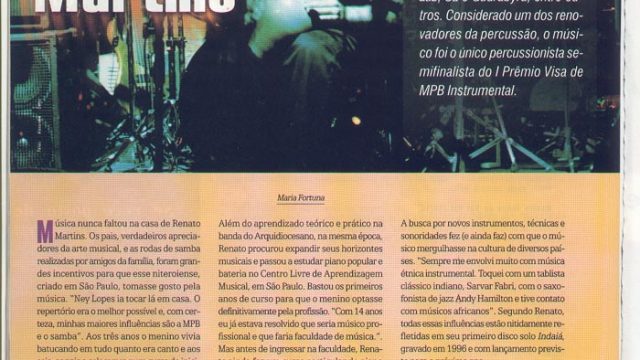 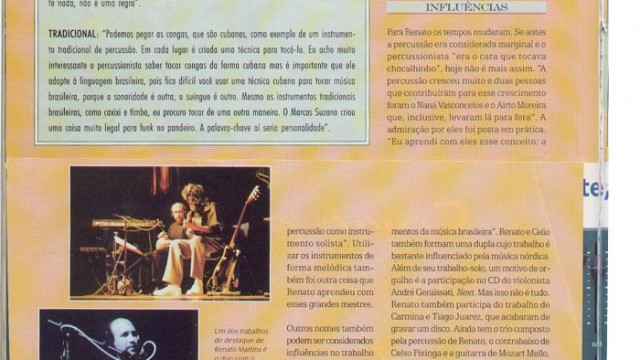 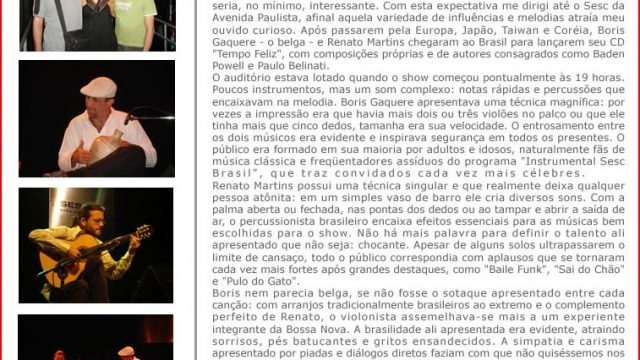 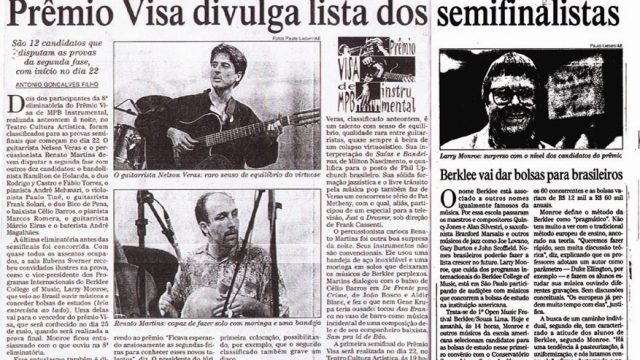