Renato has been a drummer in the past. Now he mixes both percussion and drums parts for composing the ideal set destinated to a specific project. He also has his WORLD PERCUSSION SET with congas, bongos and hand percussion instruments from different parts of the world.

“…one of the most respected percussion artists in the world…”pridemusic.com.br

“…one of the few with the amazing ability to tell stories, create tension, delight, thrill using only percussion instruments…”obaterista.com

“…an innovator of the Brazilian percussion …”submarino.com

The UDU was originated by the Igbo and Hausa people of Nigeria. The Igbo, sometimes referred to as Ibo, are one of the largest single ethnic groups in Africa. Actually being a water jug with one more hole, the UDU was played by women for ceremonial uses. Usually the Udu is made of clay and stone.

The word Udu means both pottery and peace in the Ibo language of Nigeria. Some believe the deep haunting sound particular to the drum is the “voice of the ancestors ” when used in religious ceremonies. Originally it was used strictly for women’s ceremonial purposes.

All around a typical Igbo community you can see large udus in the shade; these act as fridges. Adults and children use hollowed gourds to scoop out cold water to drink. The instrument is played by hand and produces a special and unique bass sound by quickly hitting the big hole. Furthermore the whole corpus can be played by fingers.

Today it is widely used by percussionists in different music styles. In Brazil, the Udu is also known as a Moringa. 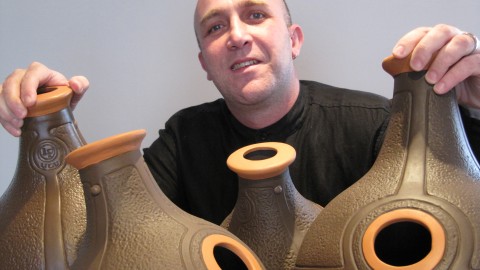 The cajón is the most widely used Afro-Peruvian musical instrument in the 20th century. The instrument has been officially declared “Cultural Patrimony of the Nation” by the Peruvian government.

Slaves of West and Central African origin in the Americas, specifically Peru, are considered to be the source of the cajón drum; though the instrument is common in musical performance throughout the Americas, especially Cuba. In Cuba, the cajón is associated with the Afro-Cuban drum/song/dance style known as rumba, while in Peru it is associated with several Afro-Peruvian genres.

The cajón was most likely developed in coastal Peru during the early 1800s. The instrument reached a peak in popularity by 1850 and by the end of the 19th century, cajón players were experimenting with the design of the instrument by bending some of the planks in the cajón’s body to alter the instrument’s patterns of sound vibration.

Knowing that the cajón comes from slave musicians in the Spanish colonial Americas, there are two complementary origin theories for the instrument. It is possible that the drum is a direct descendant of a number of boxlike musical instruments from west and central Africa, especially Angola, and the Antilles. These instruments were adapted by Peruvian slaves for the Spanish shipping crates at their disposal. In port cities like Matanzas in Cuba, they used cod-fish shipping crates. Elsewhere, small dresser drawers became instruments.

Another theory posits that slaves simply used boxes as musical instruments to combat contemporary Spanish colonial bans on music in predominantly African areas. In this way, cajóns could easily be disguised as seats or stools, thus avoiding identification as musical instruments. In all likelihood it is a combination of these factors – African origins and Spanish suppression of slave music – that led to the cajón’s creation.

In contemporary times, the instrument became an integral important part of Peruvian music and Cuban music.

In the 1970’s the instrument was introduced to Flamenco music by guitarist Paco de Lucía.

This image demonstrates part of Renato’s World Percussion show set as used during his time with Cirque du Soleil for the show OVO.